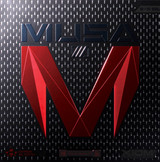 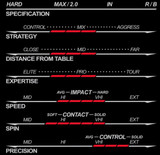 TECHNOLOGICALLY DESIGNED TO INCREASE ‘WINNING PROBABILITY’ INNOVATED POWER DYNAMICS FOR SPEED AND ACCURACY GREEN BIOS TECHNOLOGY – NO TOXIC AND NO SMELL MUSA III has a technological platform of HYPER ELASTO which applies to the most of professional rubbers of XIOM. HYPER ELASTO boosts actual winning probability, which brought immense success to the brand XIOM. Aggressive-but-safe ball trajectory made by advanced spin-charging mechanism of HYPER ELASTO increases the probability of success in rally. HYPER ELASTO rubbers used by players worldwide have proved it in real life games for many years. Modern table tennis strategy developed from China emphasize on the importance of close-to-table control. Accurate service, controlled service return, tactical pre-attack rally, and solid close-to-table topspins became the mainstream of modern table tennis. MUSA III, newly tuned from HYPER ELASTO, promotes your winning probability in these mainstream tactics with the new mechanism. Innovated controllability and new ball-clicking dynamics of rubber formula allow players to creatively make tactical ball-trajectories around the table. MUSA III will also reduce your unforced errors dramatically; you will find yourself dominating the pace of game eventually. Repulsive energy balanced against friction is maximized to the limit for aggressive speed and power.

HYPER ELASTO is a new technology for future table tennis. This advanced technology is based on TENSOR, and realized very high level of spin performance. The top layer of HYPER ELASTO rubbers is made of natural rubber, which provides excellent capability of spin and special feel of grabbing ball. Also, high level of energy is already integrated by TENSOR. HYPER ELASTO rubbers catch ball as if they breathe he ball in, and then give the ball very strong spin. Everything is effortless, and its feel is also superb. Greatly improved durability is another advantage of HYPER ELASTO, compared to conventional rubbers with built-in tension effect.

BIG WINDOW means improved security and super control. WINDOW represents the safe zone above the net, through which ball has to pass for safe landing on opponent's court, especially when player attacks with topspin. If ball passes over this safe zone, the ball will fail to land, and will go over the end line. I-IYPER ELASTO focuses on the expansion of this WINDOW. That means that the higher trajectory is allowed for safe return. In other words, the angle of swing or impact can be more flexible. Suc- cess rate of topspin attack increases, and mistake decreases. So player can be more confident about his/her own technique, and will be able to try more aggressive table tennis.

CA$54.65
VEGA ASIA is a faster and more balanced version of the VEGA series. New "Hyper Elasto" top layer of natural rubber provides superb spin, and unique "Carbo Sponge" which was developed under the...

CA$82.13
The Sigma rubbers have been released in Korea for more than a year already. Be fore the Sigma 3, 4 and 5 rubbers were all just Korea exclusive but Xiom decided to have the rest of the world also able...

CA$95.83
The Sigma rubbers have been released in Korea for more than a year already. Be fore the Sigma 3, 4 and 5 rubbers were all just Korea exclusive but Xiom decided to have the rest of the world also able...
CAD