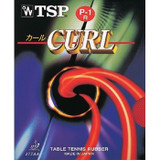 This is the revised version of TSP Curl P1R which was once banned by ITTF. P1R has the longest and softest pips among the TSP CURL rubbers produces very deceptive spins and actions after bouncing. The best long pips rubbers to generate maximum underspin while cutting a top spin ball. The TSP Curl P1R is for active modern defenders and choppers.

It is not a forgiving rubber for a beginner. Start your chopping game with TSP Curl P3 before migrating to TSP Curl P1R.

TSP Curl P1 R, a long pimple out rubber with profiled pimple surface. The thin pimples made out of soft rubber, support the possibility to produce dangerous defensive shots. It is possible to bring in your own chopping variation, which almost all professional players prefer.

CA$55.74
Speed: 3 Deceptive effect: 7.3 The TSP Curl P2 is considered as a medium pips while it is not. It has exceptional control and behaves like the medium pips. TSP Curl P2 is now back in our collection...

How To Order A Combo?   THIS COMBO RUBBER SHEET MUST BE BOUGHT ALONG WITH A </