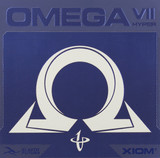 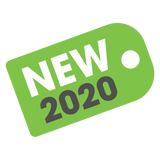 You might think that this is just another OMEGA 7. But OMEGA 7 HYPER is built on unique concept withoutstanding performance. It’s the rubber you’ve never experienced before. The main concept of this rubber is “HONEST GAME PLAY”.

Previous rubbers with Tensor technology (super elasticity) performed strong power, but sometimes we had to play the game with too much repulsive power. Therefore, we focused on developing new rubbers with greater control aspects while maintaining the same level of power like Tensor rubbers.

When you play OMEGA 7 HYPER, the ball exactly reacts as much as you hit. This gives you absolute control near the table. OMEGA 7 HYPER hardness is 55 degrees. However, since OMEGA 7 HYPER has a Cycloid technology featuring a thin and soft top sheet, you will recognize it as less than 50 degrees which is ideal range for fine control.

Even if you’re far from the table end, you can powerfully return the ball to your opponent’s end line. Extreme sponge pore compression technology has been applied to the OMEGA 7 HYPER. This special tuning allows OMEGA 7 HYPER to firmly capture the ball as if the ball sticks to the rubber surface for a moment. And you can strongly fire it towards the other side.

OMEGA 7 HYPER, it reacts as you want.

4 simple steps to find the perfect OMEGA rubber for you:

OMEGA is our high end rubber series for professional players. Highest quality standards and brandnew technologies like Dynamic Friction, Elasto Futura and Cycloid create spin and speed like never before. Newest OMEGA rubbers were specially designed for the game with plastic ball.

There is a huge range of different rubbers with different technology, sponge hardness and topsheet structures so that it is possible to find the perfect rubber for every player. Every rubber has advantages and disadvantages for your game, so it is important for you to understand which characteristics benefits your game the most.

1. Understand how the sponge hardness affects your game:

In general a harder sponge has more spin and speed potential. But to activate that high potential a high arm acceleration and advanced technique level is required. Due to shorter dwell time a more frequent training is recommended to maintain the ball control. You have a very direct feeling and ball contact because the ball doesn't sink deep into the sponge.

On the other side of the hardness range you find softer and more springy rubbers that offer lots of control due to longer dwell time. It is easier to play fast and spinny balls also with slower movements and weaker technique levels. Softer rubber also tend to give a louder accoustic feedback to the player.

2. Understand how the different trajectory curves affect your game:

Different rubber technologies were used in OMEGA series. OMEGA 4 uses the Hyper Elasto technology which supports a big window and is thereby very forgiving. Most of the OMEGA 5 rubber uses the Dynamic Friction technology to adapt to the changes that came with plastic balls. The solution was a lower ball trajectory curve with a higher focus on speed. Our brandnew OMEGA 7 rubbers even increase this effect with Cycloid and Elasto Futura. The thicker sponge and thinner topsheet are game changer and open up completely new possibilities for your game. For more information please visit our micro website for OMEGA 7 http://omega7.xiom.tt/

If you are looking for easy-to-play rubbers for professional players, you should take a look at OMEGA 4 rubbers. High control is combined with still huge amount of power through our popular black carbo sponge.

Omega 5 rubbers have a huge spin and speed potential, which has to be activated through strong acceleration of the arm. The reason therefore is, that they are quite unreactive, which adds control in the game over the table and provides in general a very stable and consistent acceleration. It's perfect to vary the power of your strokes during a rally.

Omega 7 rubber are created for powerplay to set the opponent under pressure all the time. Elasto Futura completely compensates the loss of spin and speed through plastic ball. It is often said, that OMEGA 7 topspins are difficult to block and control, because of their extraordinary long ball trajectory. Even extremly powerful shots with OMEGA 7 will sink down to the table's baseline because of the special Elasto Futura connection between topsheet and sponge. That is why our top professional players Hugo Calderano and Jeoung Youngsik decided for OMEGA 7.

OMEGA 4 (high, but quite short)

3. Understand how the catapult affects your game:

In general the softer the rubber, the more bouncy it is at slow arm movement. With fast arm movements and high acceleration all OMEGA rubber have a high catapult effect. The harder rubbers of OMEGA 5 and 7 series are the ones that can produce the highest amount of spin and speed, when the player is able to activate their full potential. Due to different sponge and topsheet structures rubbers with the same sponge hardness can have different catapult effects.

On the one hand springy rubbers take away work from the player and can produce spin and speed easily also with softer strokes like slowly played topspins. On the other hand less bouncy rubbers can be helpful in short short game over the table and give more control when reacting to fast balls because of the even acceleration.

Which characteristic is more suitable for you, always depends on your own way to play and your preferences.

Apart from the sponge hardness, the used technology plays the biggest roll in how bouncy the rubber is. There are 3 different technologies:

4. Understand how the sponge thickness affects your game:

If you take the same rubber but with different sponge thickness, you will still have the same characteristics in general. The thinner the sponge, the more you feel the blade when hitting the ball. This feedback and the slower rubber can lead to more control in general.

A thicker sponge means more spin and speed potential from the rubber. Your technique level should be advanced and your strokes powerful enough to activate the benefits of a thick sponge. The downside is a loss of some control because of its increased speed.

CA$87.44
CA$87.44
CA$53.66
The Sigma rubbers have been released in Korea for more than a year already. Be fore the Sigma 3, 4 and 5 rubbers were all just Korea exclusive but Xiom decided to have the rest of the world also able...
CAD