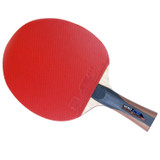 THIS PRODUCT WAS DISCONTINUED AND WOULD NO LONGER BE AVAILABLE.

The table tennis racket of the extra class for the ambitions hobby- or club player.
Developed in cooperation with the multiple European champion and Olympic medal winner Christian Süß.

The brand new GEWO Powerspeed rubber is ITTF approved and stands for enormous speed, as like the name says.

Christian Süß says: "The GEWO rubber CS ENERGY POWER is an absolute power rubber that is targeted to power and speed. The elastic and sticky rubber surface does allow fast topspins with much spin and speed. I am absolutely thrilled!
But the actual highlight of the racket is the blade. The elegant design and the specifically selected veneers with two sheets of carbon give the racket a high amount of rigidity that allows a high ball control. The SENSETISE grip module let the racket fit in the hand perfectly. Two sheets of carbon protect the racket from wetness and prevent the racket to get warped.

CA$47.18
CA$47.18
CA$19.22
For your first steps in competitive table tennis. Complete bat with good playing features thanks to well-balanced all-round rubbers. High-quality materials for reliability in any situation...

Budget-priced racket. Ideal bat for table tennis at schools and for hobby players with ITTF-approved rubbers with 1.8 mm sponge

CA$10.73
CA$10.73
CA$5.92
Inexpensive beginner racket with good gameplay characteristics. The GEWO RAVE ACTION is an ideal beginner model for beginner players and in school sports. Due to the GEWO SENSETISE-Grip-System, the...