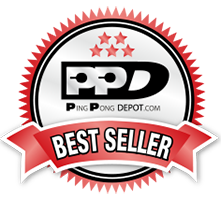 One of the most popular rubbers of all times. First popularized by breakthrough Swedish team of Stellan Bengtsson, Kjell Johansson, and Hans Alser way back in the late 1960’s, early 1970’s. Through the subsequent years, a large number of championships have been won with Mark V. The rubber has continually been developed as the demands on top players have increased. Mark V represents the absolute highest quality of rubber production and is the unsurpassed leader among table tennis rubber sheets.

Mark V was one of the first table tennis rubbers combining the best qualities of natural and synthetic rubbers and offers unique possibilities to the aggressive player who masters the modern, fast, close-to-the-table techniques. Mark V is noted for it’s low throw angle, helping to keep the ball low over the net, making your returns harder to attack.

CA$85.49
CA$85.49
CA$59.92
Phased dynamics in the energy transfer between a ball and a rubber determines the rubber performance. Traditionally phased physical dynamics has been developed to...

CA$53.75
MARK V HPS (Hybrid Power Sponge) is a top-of-the-range fast table tennis rubber and gives you all the characteristics required for advanced offensive play. MARK V HPS is the...