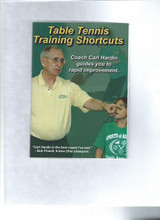 Table Tennis Training Shortcuts is a DVD of just over 2 hours by Ohio Table Tennis coach Carl Hardin. The focus in the DVD is on a better understanding of the game, particularly spin (both creating and counteracting it), strokes (with the twin elements of force and friction as well as the importance of the backswing), focus and anticipation, and effective drills to improve your level.

The DVD is not a catalog of all the different strokes or footage of world class players drilling. It is an analytical approach to the game so that beginning, intermediate or advanced players can get back to basic principles and understand how to improve their game. As Carl says to me when I mis hit a ball "why did that happen?" This DVD will help players answer that question.

Carl Hardin is the coach of rising star (currently 2300-2400 level) Samson Dubina, his sister Amanda (1900 level) as well as of 6-time Ohio state champion Bob Powell (2200 level) and Junior Olympic champion Thomas Yost (2100 level). I have made the hour drive each week to work with Carl since the spring of 2000.

Carl has studied with a number of top coaches, including Richard MacAfee, Christian Lillieroos, Barney Reed Sr. and Sean O'Neill. As Carl came to table tennis late in life, he is not tied either to a particular style or a set of techniques or tactics. The approach he takes is a thoughtful one and is based on a sound understanding of the principles behind the sport.

While Carl is well known in Ohio, Kentucky and West Virginia, he wanted to bring his system of instruction to a wider audience. He created the DVD with the help of a professional producer who is also a table tennis student. The DVD is well produced and professionally edited. It is broken into eight sections: Introduction, Strokes, Stance, Serving, Spin, Drills, Players and Hardbat.

In the Introduction, Carl discusses his approach to the DVD. He uses primarily regular players (from kids under 1000 to adults of 1500 level) in order to show common mistakes and how to correct them. The focus is less on watching the players and more on understanding the principles behind the proper technique. The introduction shows the two elements of force and friction. Each are isolated to show how they contribute to a proper stroke.

In "Stance" Carl discusses positioning and the grip. Carl focuses on getting into an effective stance and how to read the grip and positioning of the opponent for strengths and weaknesses. Carl assumes the viewer will have a basic knowledge of the sport and will be looking for shortcuts to improving their own game.

In the "Strokes" section Carl shows some of the key differences between the proper table tennis stroke and strokes in other racquet sports. He also demonstrates his unique "ball dropping" drill which is a great way for a beginner to establish a sound stroke or a more advanced player to correct problems. The Newgy robot is used here as a practice partner to work on a replicable stroke that gets force from the legs and body and spin from the angle of the blade and the closing of the elbow. Once the robot starts oscillating Carl stresses positioning, anticipation and how to focus on the ball and the opponent.

The next section I would go to is "Spin." I think this section is the heart of Carl's approach of how to work with spin, both to create it and to counteract it. As he says in the introduction, speed wind out over spin. If you can master your opponent's spin you can create speed and placement which is what will win you points. Many players don't understand spin and what it means to be "on the wrong side of the ball." Carl how to stop spin, add spin or change the direction of spin. This goes to what I think is the hardest thing to learn in table tennis, which is returning serve.

This is expanded on in the next section "Serving," which also includes service returns. This is where Carl shows what to do with the knowledge gained in the previous section. Carl shows the three kinds of spin a player can put on the ball using the forehand pendulum service. From there, he moves to getting spin, deception and placement, and ready positions to take depending on the kind of return expected. While there are do's and don't's, Carl stresses the importance of results. If something is working against an opponent, keep doing it!

In the second part of this section, Carl shows how to return serves. The modern push is demonstrated and the 360 degree possibilities of that stroke. With a proper understanding and reading of the spin (based on contact, bounce or distance) serves can be attacked or spun and placed to make it difficult for an opponent to attack. Special issues introduced by lefty players are also dealt with from both player's perspectives.

The "Drills" section shows a number of possibilities for practice. They include the importance of repeatability, how much force to use and randomness and the importance of its early intrduction once the basics have been mastered. Serve and attack, the Falkenberg, down the line, FH/BH, 2FH/2BH and Carl's own C&D drill that practices off the sides of the table are demonstrated by Bob Powell and Samson Dubina. Figure 8 pushing, one and one, in and out, flipping, BS/TS (backspin to topspin), blocking, Brazilian Teams, Triples and Plus or Minus 5 are demonstrated (server gets +1 for winning, -1 for losing, play until + or -5).

The "Players" section features interviews with different players that Carl coaches, from beginners to elite players. There are a wide variety of players here, both young and old including some newsgroup regulars. Each acknowledges a debt to Carl for helping them with their game.

The final section, "Hardbat" is less instructional and more inspirational. In this section Ping Pong Diplomat John Tannehill, one of the top full time hardbat players, demonstrates the classic strokes with Berndt Mann (playing reverse penhold with a hardbat) and Greg Morgan. Slow motion is well used in this section to show off Tannehill's impeccable anticipation and footwork as he effortlessly moves to the ball and decides whether to chop or topspin it back toward his opponent.

For someone who needs basics some background would be a good preliminary. The DVD doesn't pretend to be comprehensive, but offers some "shortcuts" to better play through understanding. As Carl corrects the old adage, "Perfect practice makes perfect." Watching top players drill and play is fun, but hard to see how they got where they are. With this DVD, you'll be able to improve.

CA$19.95
Here are 150 Tips to help your table tennis game, by Larry Hodges - a member of the U.S. Table Tennis Hall of Fame and a National Coach. They compile in logical progression three years' worth of Tips...